Why White Pasta, Bread And Rice Is Bad For Your Health

Home » Blog » Health » Why White Pasta, Bread And Rice Is Bad For Your Health 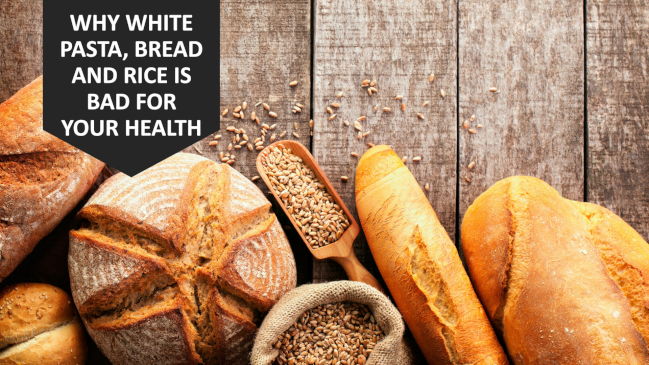 Why White Pasta, Bread And Rice Is Bad For Your Health

Having struggled with my own personal health for way to long, and regularly finding myself at my doctors or at hospitals under going one test after another yet my health problems were unrelenting. I made the decision to try and find my own solutions. It took massive changes in my diet to finally begin to see positive changes and I have learnt how to bring about in truth massive improvements by removing many of the foods that made up my staple diet. Having identified for you the reasons why I have cut out both meat, of all kinds, and dairy products, now I am carrying on with other foods I’ve eliminated from my diet these being white pasta, bread and rice.

We are consuming massive amounts of nutritionally poor plant-based foods, notably: refined grains (white bread, white pasta, and white rice), which are stripped of much of their nutrients and dietary fiber. It is a fact that people who eat too many refined grains are at increased risk for obesity and type 2 diabetes.

Research shows that consumption of refined products is the leading cause of diseases and disorders such as diabetes, heart disease and cardiovascular problems. They have also been connected to allergies, anorexia, bone loss, depression, Celiac Disease and gluten intolerance.

Things like white bread, white pasta and white rice have become staples in our Diet. While bread, pasta and rice are hard-to-resist sources of calories without much in the way of nutrition, Refined sugars provide calories but no nutrients of any kind. They’re often called “empty” calories but they should be called “villianous” calories. They’re not just empty of nutrients: they debit your health in many ways. It’s important to realize that when food is refined, vital nutrients are destroyed. In some cases it’s questionable whether what remains is even fit to be considered food… at least if the term “food” implies something of nutritional value.

Almost every nutrition expert agrees that their consumption should be limited better still eliminated.

They are often referred to as Refined or processed carbs.

There are two main types:

Sugars: Refined and processed sugars, such as sucrose (table sugar), high fructose corn syrup and agave syrup.
Refined grains: These are grains that have had the fibrous and nutritious parts removed. The biggest source is white flour made from refined wheat.

Refined carbohydrates are plant-based foods that have the whole grain extracted during processing.

Refined carbs have been stripped of almost all fiber, vitamins, minerals and nutrients. For this reason, they can be considered as “empty” calories. They are also digested quickly, and have a high glycemic index. This means that they enter the bloodstream like an injection of sugar. This injection triggers the release of insulin which converts sugar into stored fat rather than energy, starving the brain of needed fuel.

Eating foods high on the glycemic index has been linked to overeating and increased risk of many diseases.

Sadly, sugars and refined grains are a very large part of the total carbohydrate intake in many countries.

They are also added to all sorts of processed foods.

In terms of bread, once you remove the most nutritious part of the grain, it essentially becomes a form of sugar.

Other carbohydrate-heavy foods — whole grains, legumes and fruit — are nutrient-rich and far healthier for you. Eat whole grains instead of just their starchy white endosperm whenever possible, and a person’s odds of health increase.

The bran and germ are the most nutritious parts of whole grains.

They contain high amounts of many nutrients, such as fiber, B vitamins, iron, magnesium, phosphorus, manganese and selenium.

Compare this to the refined carbs which during the refining process, the bran and germ are removed, along with all the nutrients they contain, leaving no fiber, vitamins or minerals in them. The only thing left is rapidly digested starch with small amounts of protein.

Let me give you an example to demonstrate the negative impact of eating refined carbs.

Back in 1911, white bread was identified as a primary culprit for the declining health of the British population, which led to a massive campaign to revert back to more wholesome bread. At the time, wholegrain bread was considered a sign of poverty, so people from all levels of society sought after white, refined flour bread.

The campaign spearheaded by The Daily Mail was eventually successful. But it didn’t last long… White bread was actually banned during World War II in the UK, and as a result, Britons were said to be in better health by 1947 after subsisting on limited rations of wholegrain breads for eight years.

However, at the end of the war, white bread was rendered legal once again, and today, more than 60 years later, our grocery shelves are stocked with breads and grain-products that are of even lower quality than 100 years ago… And, as in 1911, white processed bread is a major contributor to rampant obesity and poor health.

Many of these ingredients are hidden, as they’re not required to be listed on the label.

My message today is simple.

Remember that all the chronic diseases of lifestyle are associated with the wrong eating habits.

Refined foods, simply put, are deficient in nutrients, and eating foods devoid of nutrients will cause the immune system to falter, so that it can no longer cope with the daily onslaught of toxins, stress and the thousands of germs that attack it. To keep our immune system in peak condition, we must eliminate disease-causing foods.

The simplest way towards a healthy life, is to eat foods in their whole form wherever and whenever possible. Consuming food as nature intended is the wisest approach toward good health. So start cutting out white bread, pasta and rice. You know the healthier alternatives will be far better for you.

In all cases, any grains you do consume should be whole grains. I promise you that they are not only healthier for you but they taste great.