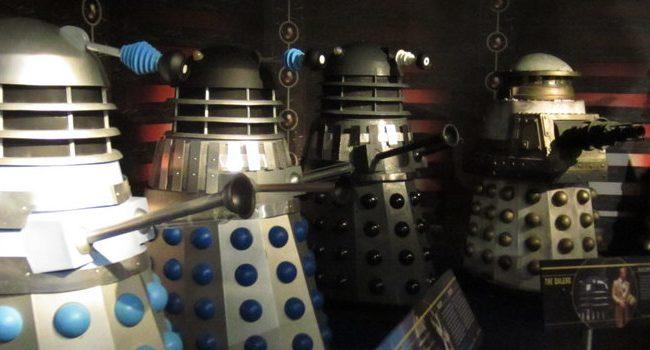 Straight away you’re learning something new about me, I’m a Doctor Who Fan. Part of the title may have given that away. In a recent Doctor Who episode (Doctor Who Series 9 Episode 2: The Witch’s Familiar) we saw Missy and Clara walking through the sewers of Skaro surrounded by lots of nasty goo which turned out to be the remains of aging Daleks. After all, the translation of sewer in Dalek is grave yard, see it can be a very educational program. They set about to capture, well in fact murder, a Dalek helped by the remains of very old very angry Dalek goo. In his last breath the Dalek shrieked the quote at the top of this article, “Emergency, emergency, eye vision is impaired, exterminate, exterminate!”

Later on Doctor Who struck down Davros and his Daleks and in their dying last moments they screamed:

Emergency what is happening …

My vision is impaired, I cannot see.

Anyone who has visual impairment must have taken a double take and asked themselves, ‘did I really hear the Dalek’s say that?’

I now know this isn’t the first time visually impaired has been used in Doctor Who. “My vision is impaired!” was first used in 1984’s Resurrection Of The Daleks, and later in other episodes.

Visual impairment is a problem that is getting bigger all the time, and maybe that’s why it has become an interstellar problem. There are now over 314 million people worldwide who live with visual impairment , with 45 million being blind, this number doesn’t include the effected Daleks. I’ve recently learnt these statistics on the major causes of blindness:

The Dalek’s words echo within the minds of many of us when first facing up to our own visual impairment. ‘’Emergency! Emergency! I cannot see. My vision is impaired. Emergency!” The initial impact of visual impairment on those inflicted by it is to sink into a deep, dark, lonely and seemingly endless depression. Not only have they lost a major part of their sight, they lose all hope and belief in their future.

Well I want to tell you that you don’t have to feel lost or helpless anymore. There is a way to rebuild  your life seeing (did I really use that word) your potential and possibilities for your future, where your visual impairment can’t stop you.

If you’re experiencing visual impairment, your eye vision is impaired, you need to know that there are people like you who’ve come to terms with the changes this brings to our lives. Getting to that point isn’t just a matter of mastering physical challenges. The first hurdle is emotional. In fact, it is often on the emotional level that the impact of vision loss on individuals and families is felt most forcefully.  It has a greater impact on overall mental health and is associated with impaired activities of daily living,  social isolation,  cognitive impairment,  depression,  reduced quality of life, impaired functional status,  impaired mobility,  increased dependency on others, increased motor vehicle accident risk,  risk of falls and fractures,  and poor self-rated health.

Having a long-term illness can unsettle your life in many ways and this certainly includes where your eye vision is impaired. I personally have had to learn how to cope living with the daily frustrations of visual impairment. It is essential that once you move beyond the shock of your diagnosis, you learn how to deal effectively with the daily stresses of living with visual impairment. Keeping an optimistic outlook can be tough. Illness is scary and forces you to deal with uncertainty, a lack of control, surrendering to doctors, and the reality that life is finite. All of that is pretty frightening and difficult, so I am not surprised when someone cannot feel positive all of the time when coping with it, but cope with it you must.

We each will face the process of adjusting to our visual impairment and its many implications in our lives. We have to find our own way through the initial trauma, the struggles we now face with sudden and substantial life changes, until we arrive successfully at having adjusted, adapted and moved life forward. Even though the Daleks couldn’t cope, we humans can, will and must. Refuse to allow visual impairment to define the rest of your life. Your eye vision is impaired but your life doesn’t have to be.

My name is Larry Lewis, Health & Wellness Life Coach, Founder of Healthy Lifestyles Living, contributor to the Huffington Post, recently featured in the Sunday Mail Newspaper and somebody who went from being an owner of a chain of gyms and fitness fanatic, to a visually impaired overweight and incredibly sick person. Read about my illness to wellness story.
© 2010-2023 HLL Limited - All Rights Reserved.